Here are a few new pictures of the Randonneur. You know the drill, it's not finished yet. But we're getting there. Tomorrow I will do the last bits of welding and then I will wait for the lovely parts.
I decided to put the bottle cages under- instead of behind the seat. That has the big advantage that you can pull out bottles quicker without turning them around and that you can also put it back quicker, which will let you ride on faster as well. At first I was hesitant to do so because of the extra frontal surface this change would create, but after putting them on for a try I was convinced of the ergonomically advantage plus that they don't put on that much extra surface at all.
I also finished the fenders, but I didn't take a picture of them yet. That's something for later. 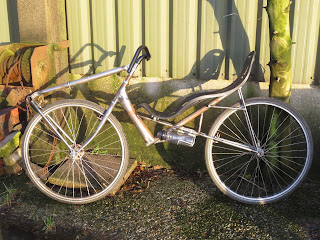 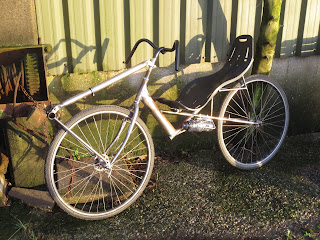 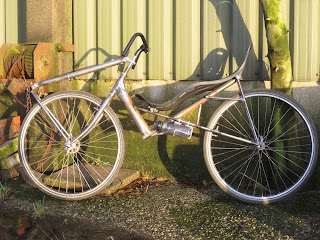 Training is good so far considering that I had a good cold last week. Actually, the cold was quite bad, but that sounds so negative.

Enjoy the pictures and don't hesitate to ask questions.

Nice post. I learn something more challenging on different blogs everyday. It will always be stimulating to read content from other writers and practice a little something from their store. I’d prefer to use some with the content on my blog whether you don’t mind. I’ll give you a link on your web blog. I recently came to know about http://rainbowpowdercoatings.com/, their Powder Coating are very effective.
Powder Coating Thanks for sharing.

MBB bikes do interest me a lot in the last months so I mess around in fora, YouTube and other platforms. Last month I had the chance to ride a recumbent for the firs time, it was a HP grasshopper 20" foldable. Not so bad…so I consider to jump into the recumbent scene.
Your bikes are to some extend different and I would like to visit you in order to make a test run and decide what next to do.

One question I have: a good friend who is becoming blind gave me a Cannondale racebike with alumnium frame with 700/22 tires and Shimano components as of 100/105 series. Would it be possible to take these parts as a donor or would it be better so sell? Selling a gift isn't so comfortable for me but using these parts helps to squeeze the costs and frees my mind……

That's all for the moment, it would be great to get a reply.

BTW: near Utrecht on the Vinkeveen'se lassen I started Windsurfing in 1974….. ;-)

All the best
Bernd