Last Sunday the Afsluitrace took place again for the fifth time. I participated for the second time. It was a blast. Spending a day with a lot of good humored, bicycle loving people drinking beer and eating soup and, by the way, cycling, sounds like a good Sunday. Did I mention the weather? It was beautiful. 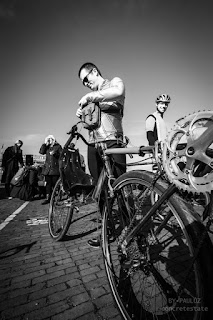 "But what about the cycling" you might want to ask? Well, I didn't win and I can't say that I didn't try. But nevertheless I am very happy about the new bike in general. It all started when we went up to the starting position. Due to a bad road and a lot of stop and go in combination with tight corners I had to get off the bike and push it to the start, this way I found myself quite in the back of the field before the race even started.
Luckily I rode a fast bike and I was able to overtake most of the riders in the beginning of the race. I was looking forward to rock the field together with Mick who also participated with his MBB bike. Unfortunately Mick had problems with his gears so that he couldn't keep up in the beginning. So I cycled on, trying to make the jump to the head group. I had passed the second group and prepared myself to soldier on. When I switched over to the 52 blade in front, my chain fell off. Odd, because I had adjusted everything before leaving the workshop. There are only two possible explanations here, either I just think that I did it right and instead I did a bad job or something got bumped on the way in the truck to Den Oever. One way or another, the chain went flying, but luckily got caught by my foot so that I could manage to switch it back on the small blade without having to stop. Due to the disturbance on the front dérailleur, something went wrong in the rear and for a brief moment I was afraid that I had to stop. With some pressing of 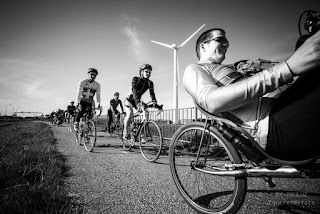 the buttons I was able to get the chain free. By the time I was able to speed up I was caught up by the second group. I settled in and rolled with the group. I think that not everybody was happy with a recumbent bike in the group because it didn't create enough disturbance to hide in the wind shadow, or so they thought. However, I had a blast in the group we managed to hold a decent pace and reach the checkpoint at the end of the dike in good time. At the checkpoint it was all about speed again. We left the checkpoint with a group of four people. After a few kilometers on the way back, the pace took its toll and the speed started to decrease. My plan was to stick with the group until about 5 kilometers before the end and try to make a run from there. In the middle of the dike, after a total of 48 km we had to cycle up a little slope. At that moment I was leading the group already for a little while and my plan was to fall back and relax for a minute after we had taken the slope. With that in mind I put a lot of energy into the "climb" not to slow down too much. By the time we where up I looked into the mirror, waiting for my group to overtake me but instead of rushing past me they became smaller and smaller in my mirror. I was already on the down slope again and above the 40 km/h so I didn't feel like breaking at all. I made a split second decision and went for it. Not that I wanted to get rid of my group so eagerly, I just didn't want to slow down. This way my big escape started a bit involuntary and prematurely about 16 km before the finish. My goal was to get as close as possible to the head group. Sometimes I thought that I could see them far in front of me. But I just wasn't able to close the gap. 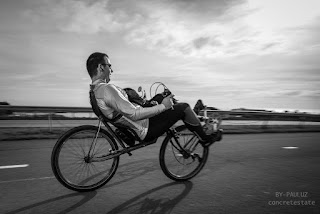 The next time I saw the head group, was in the finish. I was able to hold up my speed for the most of the remaining 16 km, but in the end I was a bit empty.

I am looking back to a good race with ups and downs and beautiful weather conditions. Apart from the one glitch, the Vrijwiel racing bike held up very well and I was able to produce some nice speeds. My time of 1h 45min is 10 minutes better then two years ago. Nothing wrong with that. Thanks again to the organization and to all the nice people who sponsored me with their donation to Live Build. Thanks to you guys a lot of people can enjoy fresh water in Cameroon.
If you are interested in a test ride with this speedy prototype, don't be shy, just send me an email or call me.
Gepost door Olaf op 09:55 Geen opmerkingen:

Rather spontaneously I've decided to participate in the afsluitrace 2015. I want to try out a new type of racing set up for the Vrijwiel MBB. Because of the quick decision I made, the bike will look rather naked without any paintjob. I will post a picture later today.
However, behind the afsluitrace hides a good cause for a water project in Lobange. You can read all about it under this link. To help this cause (or to help me race the afsluitdijk, however you want to put it) you can donate money under my name on this link.

I will keep you updated on this subject. The race will take place on sunday 25th of october on the Afsluitdijk. I will post some pictures later.

The Vrijwiel Solo has found a new owner. From now on it's making its kilometers in Germany. I wish a the new owner a lot of fun with this racy little velomobile. According to the new owner it will be used for Audax. So hopefully we will see each other again. If you see the Solo riding around, take a picture send it to me! 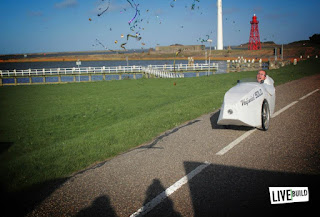