peeking in the workshop

After winning the "Afsluitrace 2013" one could ask: "What else is there to achieve?"
I would say: "Make it better." So I've locked myself up in the workshop and started rethinking the Vrijwiel Solo prototype. The luggage compartment had to become bigger, the PVC ribs had to make space for aluminum, the man hole got a bit smaller, especially behind the head where one doesn't need a hole but more space for luggage instead. Also the shoulders of the man hole became a bit higher so that the pilot is sitting even more "in" the bike than before. I've also given the bike a butt lift (didn't change the face yet) which I have to say I find rather sexy. But see for yourself and remember that it is work in progress what I'm showing here right now. 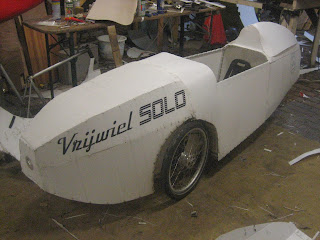 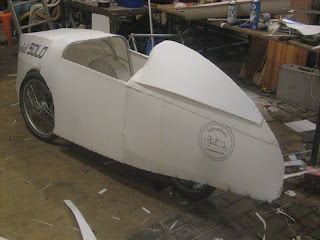