There are some new friends of Vrijwiel. My special thanks go out to Irene van Ditmarsch and Henry van der Leeden of Partyservice Van der Leeden for their support. Thank you guys, with your support I can develop a new bike and be able to participate at the Winterfietselfstedentocht 2016.

Talking about the upcoming event, training last week was a mix between absent and overwhelming. Beginning of the week I felt a bit under the weather so I skipped the Tuesday and Wednesday training. Thursday training was rescheduled to Friday because I had to work the whole day. Saturday was scheduled to run some sprints, but thanks to a whole day of appointments I wasn't able to do it. Which leaves me at today's training. I had to cycle 180 minutes in a more a less relaxed tempo. cycling in a relaxed tempo is a bit of a difficult thing for me to do, so training it couldn't do any harm. I went out and it was storming here in the Netherlands. After the bad start of this training week I didn't want "not to go outside and train" become a habit so I pulled myself together and faced the storm. Good practice for February anyway. I got pushed around by the wind in almost every direction possible and had some close encounters with ditches (not too close luckily). It says something about the strength of the wind when you really have to put your back into it to make 16 km/h with the wind in your face and cruse above 40 km/h with almost no effort with it blowing in your back. Due to the abundance of darkness this time of year I spend two thirds of my training in the dark which gave it an extra elfstedentocht feeling.

Maybe you remember the nice racing bike I built for the Afsluitrace a few weeks ago. I got it back from the powder coating and it sports a very cool sparkly white color now. It looks very cool and lives in the workshop now. If you are interested in a one-of-a-kind front wheel driven, moving bottom bracket racing bike you can contact me to have a look whether it is something for you. It's not in the way so don't expect me to give it away to you. if nobody is interested I might try it out at a recumbent race somewhere next year to see if the nice white paintjob gives it extra speediness. 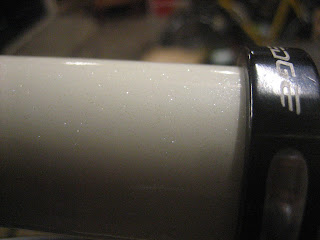 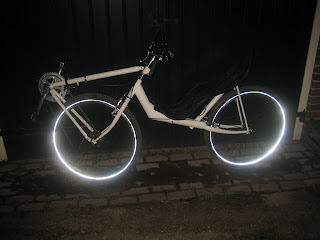 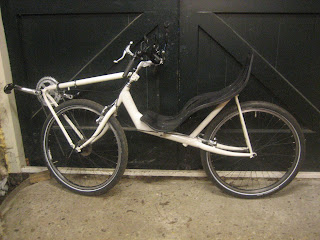 That's it for this week, I will post some better pictures of the racing bike somewhere in the coming week, so have a look at the blog once in a while if you are interested.
Gepost door Olaf op 21:32

I recently thought out another type of two wheeled MBB that might interest you. A tandem!
I have built one in the past more or less like the M5 tandem but with both front (MBB) wheel drive as backwheel- for the second rider there's a simple solution for
independent gear-changing.
Also it will be very probable easy to steer because you will automatically have plenty of weight on the front wheel !
Regards, Mick