As you might have already read, I was busy trying out whether cardboard would be a good material to build a velomobile from. The first test piece finally dried and became a sturdy, light weight, ugly thing. 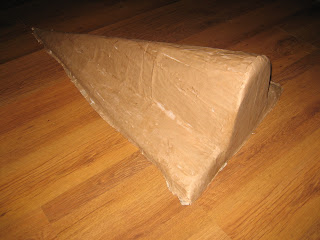 I was already prepared that it wouldn't be the most beautiful thing to see and I was mostly interested in the sturdiness of it. I haven't been disappointed. For this one I have used wood glue, three layers of corrugated cardboard underneath 4 layers of brown packaging paper.
Since this one had come out so ugly I've decided to use it as a weather test. Today I've painted it with a few layers of spray paint and after letting it dry it got a nice little spot in the garden. I will keep it there and will post on this blog how it behaves in the Dutch winter.

This is it, all dressed up as Captain Kirk, just before being beamed into the garden. 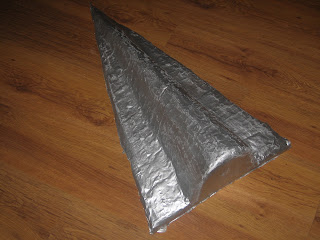 I've also started a new test piece yesterday. This one doesn't have any corrugated cardboard underneath, I hoped that it would get some straighter lines this way and again I haven't been disappointed. Here you can see it drying the 6th layer of paper. 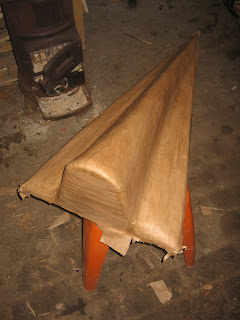 The down part of this piece is that it probably won't have the rigidity of the piece with the cardboard. Again I will have to wait until I know how it comes out. I've also used a different kind of glue on this one: extra strong wall paper glue.

My third and last experiment includes these two little bowls. 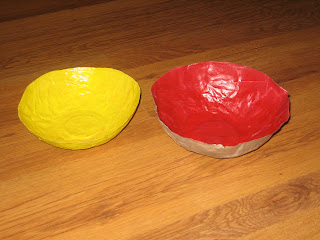 Both of them consist of three layers of paper held together by the same wall paper glue as used in the second test piece. I've spray painted them with some left overs from the workshop. I've used two stainless steel bowls as mold, the yellow one has been made on the outside of the bowl, the red one has been made on the inside. Again, no beauties. Apparently I should have let them dry out on the mold, but I wanted to get the job done.
As soon as they are completely dry I will fill them up with water and stop the time until they start to leak.
If they survive that experiment I will have two interesting crisp bowls.

That's it for today, keep an eye on the blog because there will be more posts about the cardboard project in the coming days.
If you have any comment or know a better way of doing it, don't hesitate to write it down.